Not long ago, a woman in Virginia, Jackie Wilson, received a word from the Lord regarding the election. The Lord referred her back to the story of the champion race horse, Secretariat.

Jackie and her family live in Virginia not far from where Secretariat was born. Recently, she and her daughter sensed the Lord was speaking to them to watch the movie, “Secretariat.” As they watched, He began to speak an explosive word.

“Big Red will win all three!”

It came after one of the scenes toward the end of the movie, in which Secretariat’s groomer, Eddie Sweat, stood at the Kentucky Derby race track at sunrise all alone. It was just before the first of three races Secretariat would need to win to take the Triple Crown. Secretariat had fallen short in his final prep for the Kentucky Derby finishing third in the Wood Memorial at Aqueduct. Speculation began to circulate whether Big Red could actually win all three events, something which hadn’t been done in twenty-five years.

For several days following the loss, Big Red refused to eat. Obviously something was very wrong. The concern became whether he could even participate much less win the upcoming race. But then Sweat discovered the horse had an abscessed tooth.

Once the vet took care of the abscess, things began to shift.

In the scene, as he stood looking out over the race track, the groomer yelled out what was a prophetic declaration,

“Big Red done eat his breakfast this morning and he’s about to do something you ain’t never seen before. So get ready!”

When Jackie heard that line, her spirit leapt and she knew God was talking about the fact that His plan was for us to win all three areas of the election: the Executive office, the House and the Senate. She sent that word to her former pastor, Dan Blacksher an associate pastor at Hope Fellowship in Brandon, MS. That’s when God began to speak further.

Blacksher began, “The Lord said, ‘I see the sham. (Sham was the name of the horse that was essentially the only competition Secretariat had in the Triple Crown races. Sham’s handlers boasted that Sham would not only beat, but destroy Secretariat.)

NOW AVAILABLE: Infected: How to Stop the Global Spread of Rage, Deception and Insanity

The word continued, ‘I see the sham that is Biden and Harris and their “handlers” which is the national media guaranteeing a victory.’

‘But they will be stunned by what they are about to see.’

Blacksher continued, “Big Red’s tooth represents the infection that is in the wisdom of the leadership of the House of Representatives and it will be pulled.”

“I felt the Lord say, ‘Big Red won by 31 lengths and there will be 31 seats that are going to be overturned in “big red’s” favor.’ I didn’t know if he was talking about just in the House of Representatives or the House and the Senate, but they are going to move to red.”

He continued, “Big red will win the Triple Crown, the House, the Senate and the White House and for the first time the government will run at full speed capacity and authority.”

Blacksher then explained, “The word ‘Belmont’ means beautiful mountain. And the stakes represent the ancient markers. And the Lord said, ‘I am re-establishing the ancient markers of government: the Word of God and my Spirit that is on the Constitution and Bill of Rights.

And the giants that have been in that mountain and that have made it a place of fear, will be driven out of the House, the Senate and the White House; the lower court and the Supreme court. And the government mountain will become a Jericho as the walls fall. It will then become a place called ‘Hebron’ again–a place of friendship with Me.’”

“The Lord then said as, ‘Big Red’s heart was two times the normal size, I’ve put that same heart in President Trump for his love for this nation. His strength has come from Me. And his stamina has come from Me.’”

People may remember that Big Red was known as a horse that loved to show off for crowds. It was a confidence that came upon him when around large groups and cameras. With that in mind, Blacksher continued,

“And the Lord said, ‘I’ve put that same confidence in Donald Trump. It’s not arrogance. It’s confidence because he knows I’m with him and he’s doing exactly what I’ve called him to do.’”

“The Lord said, ‘Big Red will win the Triple Crown.’ And it will leave fans, sceptics and haters in stunned silence as they watch ‘the horse’ (Donald Trump)–as they watch what’s going to happen on November 3 and they’ll have to say, ‘We’ve witnessed a miracle.’”

Blacksher then shared a scripture the Lord spoke next. It was the very same one used in the last scene of the movie from Job 39:19-24, only He used it in reference to President Trump.

“Do you give Donald Trump his strength or clothe his neck with a flowing mane? Do you make him leap like locusts striking terror with his proud snorting? He pauses fiercely rejoicing in his strength and he charges into the fray. He laughs at fear, afraid of nothing. He does not shy away from the sword. The quiver rattles along his side, along with a flashing spear. With frenzied excitement he eats up the ground. He cannot stand still when the trumpet sounds.”

So where do we stand spiritually in regards to this prophetic word? We are just days before the election, our “Belmont Stakes” and the last race for this “Triple Crown.”

In horse racing, the Triple Crown consists of three wins in a short five to six-week time frame: the Kentucky Derby, Preakness Stakes and Belmont Stakes.

To give some background of the final race (which we are in), I talked with professional jockey Otto Thorwarth, author of “No Ordinary Champion.” 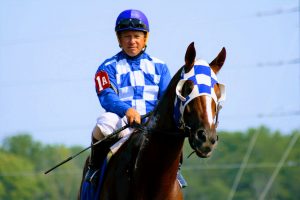 Thorwarth is the jockey turned actor who rides Secretariat in the movie. Now retired from racing, Thorwarth is a minister and had some insights to share regarding the race.

“The Belmont Stakes is considered the ‘graveyard’ for Triple Crown horses,” he stated. “There are a couple reasons for that:

“First, it is the longest race (1.5 miles) of the three races. What many people don’t realize is that at that time in their careers, the three-year old’s in the Belmont have never had a race of that length.”

“Second, they have already run in the Derby and the Preakness before they face the most grueling of the three races all in just a five-week time period,” Thorwarth explained. “Many can’t make it.”

President Trump has been holding three to four rallies a day on top of running the country, attending the confirmation of the new Supreme Court justice, Amy Barrett, and strategically helped negotiate yet another peace treaty in the Middle East. This time between Sudan and Israel.

The man is on fire as we watch Biden run out of steam.

May we continue to pray for this election as we pray for our nation.  We are now turning the last corner of this grueling race. May it mirror what happened in 1973 as Secretariat turned and looked at Sham as they ran neck and neck heading into the last turn. Suddenly, Big Red burst past Sham to win by an incredible thirty-one lengths setting a record still untouched forty-seven years later.

Lord we declare, “Big Red done ate his breakfast this morning and we’re about to see something we ain’t ever seen before. We are getting ready! We come into agreement with you that November 3rd will be a happy day of a Triple Crown win as the House, Senate and presidency all turn red in Jesus’ name.