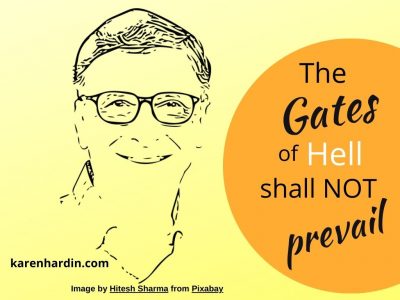 A friend of mine heard a word from the Lord today as she was praying. He said to her:
“The GATES of Hell shall not prevail against the Church.”
She knew He was referring to more than just the scripture in Matthew 16:18. It was also in reference to Bill Gates.

The GATES of Hell shall not prevail against the Church.

We all know of Bill Gates right? The man who became a billionaire after he created MS Windows – the software program extremely susceptible to viruses.
Perhaps this is where Gates began to understand the powerful connection of anti-virus/vaccines to money and power? While Norton and McAfee made millions with their anti-virus software, Gates eventually jumped in to make money on the cure for his own faulty software.
The world and our computers were saved and he made millions on both the virus susceptible software he designed AND the anti-virus software. How convenient.
Fast forward to the Corona Virus.
Why did Gates and the Rockefeller Foundation hold a dry run of a pandemic, Event 201, which they just happened to call a “Corona Virus” pandemic this past October 2019 in New York?
Gates just happened to start work on a Corona Virus vaccine more than three years ago so that it’s just almost ready at the time it is needed most
Why are Gates and Dr. Fauci pushing for the new CV-19 vaccine to be mandatory?
Also, doesn’t it seem rather odd or coincidental as we look at the close working relationship Gates has with China where the virus began?
Did you know Gates received one of the highest honors from China from the Chinese Academy of Engineering and is also one of their biggest funding partners. He also has a Gates Foundation IN China for healthcare innovation. Sounds admirable…or dubious…

The GATES of Hell shall not prevail.

Gates went from creating software that needed a vaccine to keep our computer’s and our idenitities safe to what appears to be strong involvement with the same country where the virus originated.
And once again Gates seems ready to swoop down with the needed anti-virus. The CV-19 vaccine. Yes I know people say he has given billions to “research” this being the philanthropist that he is. But make no mistake those billions and overwhelming control will all come right back to him.

If that hasn’t got you thinking how about this?

Want to know his most recent vaccine invention? It’s called ID2020.
It is set to launch as early as this year via the World Health Organization. The media calls this a “conspiracy theory” but Gates has been talking a lot about it and is very proud of it actually. Go google ID2020 before they take it down or sanitize it.
It allows for digital ID markers to be inserted into vaccines.
And want to know who is behind the organization?
The ID2020 leadership includes (no surprise) Microsoft, Rockefeller Foundation, and Gavi (Gloabal Alliance for Vaccines and Immunizations). Yeah the same organizations and people behind the Event 201 Pandemic corona virus dry run this past year in NY.
Coincidence?