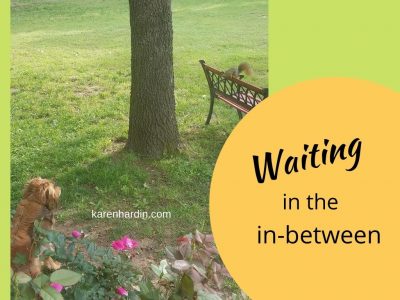 This is a word for those who are praying and asking God,

“Did I really hear your voice?”

“Did you really tell me that?”

“Will you please confirm your word to me?

If that is you, read on. For you are in the place of in-between.

One of the most challenging places in life is the “in-between.” It is that place where patience is required and tested. It is where dreams live or die.

As I walked onto our front porch recently I caught a visual of what it requires to successfully maneuver the in-betweens we encounter in life.

As I stood on our front porch, I saw our dog Darcy, patiently waiting and watching a squirrel which sat on a bench just a few feet in front of her. She sat motionless watching for any sign of movement.

The squirrels often taunt her allowing her to get close before they dart away. I’ve watched them climb down the tree toward her and chatter at her as they remain poised just out of reach on the trunk. Once she darts over, they race further up and out of her reach.

But, no matter how many times this scenario repeats, Darcy refuses to give up. I have watched her stand at the bottom of one of our trees, in the rain, for an hour waiting on the squirrel she chased up to come down. She is relentless.

Although she has never caught one, I believe she will one day. Why? Because she refuses to give up. She is patient. She is willing to simply wait.

It is a picture of what God has called us to do when we are in the in-between. 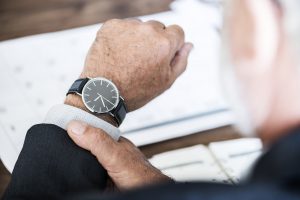 Waiting is one of the hardest things to do isn’t it? It’s seems so inactive. Sometimes we are just waiting as we tap our feet, cross and uncross our legs, look at our watch. We know and believe God is at work, but would He hurry up already!

But there are other times when there is action in the waiting. Can you imagine Noah who was told to build an ark? He was obedient for a hundred years diligently working, while simultaneously waiting. For what? Rain? Something he had never seen before? He was waiting for the fulfillment of what God had spoken to his heart.

What went through his mind as he was taunted by those around him. He must have surely second-guessed himself and wondered, “Did the Lord really tell me to do this?”

Noah was in the difficult place of “in-between.”

Are you in the place of in-between?

The in-between may seem like an inconsequential part in our journey, but in actuality it is extremely important. It is a place of faith where we have the opportunity to go higher.

The word “between” in Hebrew is the word bayin. It means “the interval.” As I study that in scripture it holds significant meaning.

There are many “in-between” places in scripture.

Think of David as he faced Goliath. He stood with his brothers and the Israelite army one side. The Philistines and their intimidating champion stood facing them on the other side.

“The Philistines occupied one hill and the Israelites another, with the valley between them” I Samuel 17:3.

When Moses led the Israelites out of Egypt, the wilderness was their “in-between.”

When Jehoshaphat and the Israelites were being charged by three enemy armies, they spent their in-between in fasting, prayer and praise. They had to do their part so God could do His part.

“This is what the Lord says to you: ‘Do not be afraid or discouraged because of this vast army. For the battle is not yours, but God’s. Tomorrow march down against them” (2 Chronicles 20:15).

When Nehemiah accepted the challenge to rebuild the walls around Jerusalem, which had been broken down for 152 years, the in-between started from the moment God birthed that vision in his heart, until the walls were completed.

It required a fierce determination to walk the vision out by faith as he went before King Artaxerxes, as he rode out at night to examine the condition and extent of the project, as he tried to motivate the people to join him, and as they began to rebuild facing extreme opposition.

He must have sounded like a crazy man. For as I look at each of these instances, that is what the in-between often looks like. A crazy plan.

Nehemiah’s plan began with a request to the King (of kings) and then to the king of the land as he prayed,

It was a crazy idea.

AND YET, it was a God idea! It took courage. It took patience. It took faith.

Are you in a place of in-between?

Abram encountered God at an in-between place between Bethel and Ai.

“From there he went on toward the hills east of Bethel and pitched his tent, with Bethel on the west and Ai on the east. There he built an altar to the Lord and called on the name of the Lord” (Genesis 12:8).

All he had at that time was a promise as God told him, “Go from your country and your relatives to the land I will show you. And I will make you a great nation and I will bless you, and make your name great, and you shall be a blessing.”

It was the place of in-between.

SEE ALSO: Positioned for Your Purpose

And yet after Abram obeyed and journeyed into the unknown, just a few years later, he returned to where he had built the altar, only now a very wealthy man. He returned to that in-between place between Bethel and Ai and called on the name of the Lord—for further direction.

He had experienced the blessing of walking through the in-between, that unknown place between the promise and manifestation. And he was living proof of the blessing that came from that obedience.

Why did he physically return to that altar in the in-between place, because he was ready do it again! He was ready for his next crazy assignment.

“Abram had become very wealthy in livestock and in silver and gold. From the Negev he went from place to place until he came to Bethel, to the place between Bethel and Ai where his tent had been earlier and where he had first built an altar. There Abram called on the name of the Lord” (Genesis 13:2-4).

There are many now in the place of in-between. You wonder if you are crazy. You are second-guessing if what you heard was truly from the Lord.

You may even have people around you taunting you, laughing as you stand in faith and obedience walking through this place of in-between. For some, years have passed and you are ready to give up. Don’t!

While we pass through some in-between places quickly, others, like for Noah, lasted for years and years. And yet, God was in the timing the entire time.

You are about to encounter His face and His favor. The King is opening the door to the manifestation of the promise.

If you are between the promise that was spoken and the manifestation for which you wait, then the word the Lord would say to you now is to wait. I’m reminded again of the visual of my dog, waiting, in the rain for the squirrel to come down. Waiting, waiting, waiting.

“I would have despaired unless I had believed that I would see the goodness of the Lord in the land of the living. Wait for the Lord; Be strong and let your heart take courage;
Yes, wait for the Lord” (Psalm 27:13-14).